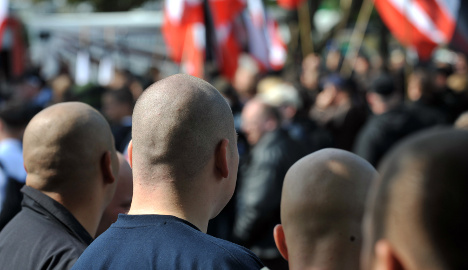 A far-right demonstration in Dortmund in 2009. Photo: DPA

Marcus Arndt, 43, was on his way home from the U-Bahn after photographing 30 neo-Nazis demonstrating against a refugee accommodation block, despite a counter-demo by 300 people.

He suddenly realized that he was being pelted with stones from behind.

“I had already had a strange feeling in the U-Bahn,” the freelance journalist told Ruhrbarone. “I had noticed several people in typical clothing for the far-right scene.”

When he turned around, he saw two attackers. They threw more stones, hitting him on the head and upper body.

Both of them were making death threats against him as they continued to attack.

Ardnt was able to scare the pair off using a blank-firing pistol before calling the police and his friends using his mobile phone.

He was taken to hospital in an ambulance for a brief examination but was able to leave soon afterwards.

“Dortmund has the biggest neo-Nazi scene in Germany,” Ruhrbarone journalist Sebastian Weiermann, who accompanied Arndt to the hospital, told The Local.

“Recently I've noticed a whole bunch of younger Nazis, it might be a sort of dare for them [to attack us].”

Weiermann added that while they would be taking precautions and avoid travelling alone, the reporters would not allow themselves to be scared off and would look more closely into the people who might be behind the attacks.

“We've just set up a special squad investigating the far-right,” Dortmund police chief Gregor Lange said on Tuesday, adding that 12 new members would be added to the team and that the crime would be given the highest priority.

Police officers will also be assigned to protect Arndt, he said.

A police spokesman told broadcaster WDR on Tuesday that “some clues point towards” the attack being linked to the death threats Arndt and other journalists in the region had already received.