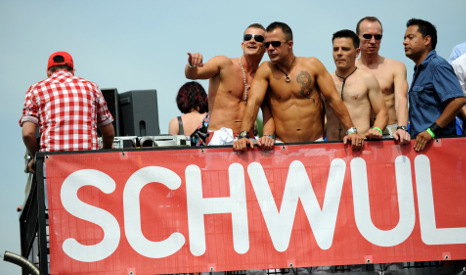 Markus Ulrich, of the Lesbian and Gay Association (LSVD), was responding to comments by Green party chairman Cem Özdemir, who told the Huffington Post on Tuesday that the German political class had fallen behind mainstream German society in its attitude to gay rights.

Özdemir said that politics has a guiding role in society, and that if politicians do not respect the idea of equality for all “then we shouldn't be surprised that prejudices do not go away.”

The Green party leader was referring specifically to the reluctance of the Union – the Christian Democratic Union (CDU) and its Bavarian sister party the Christian Social Union (CSU) – to pass legislation granting equal marriage rights to gay and lesbian couples to those currently afforded to heterosexual couples.

“There are 150 regulations in 54 laws which discriminate against same sex couples,” said Özdemir, calling the Union position on the issue “absurd and long refuted by reality.”

Asked whether he thought Germany was ready for full equality, Özdemir replied “absolutely.”

But Ulrich warned The Local on Tuesday that tolerance for gay and lesbian rights in German society is “brittle.”

“Homophobic groups are on the march,” he said. “Anti-feminist currents and religious fundamentalists are combining forces with homophobic attitudes which come from the middle class.”

For Ulrich, blame lies with the right-wing parties in Germany's coalition government.

“The attitude of the Union is totally irresponsible and discriminatory. It powers the engines of homophobic elements in our society and encourages prejudices and discrimination.”

“LGBTI [Lesbian, gay, bisexual, transgender, and intersex people] are treated as second class citizens; equal rights and social equality are denied to them.”

He also cast doubt on Özdemir's assertion that the German public was ahead of the political class, calling the Union policy on gay rights “intrinsic to their brand.”

“Irrespective of whether this essential brand of the Union is shared by the wider German public, it did not stop over 40 percent of registered voters from voting for them.”