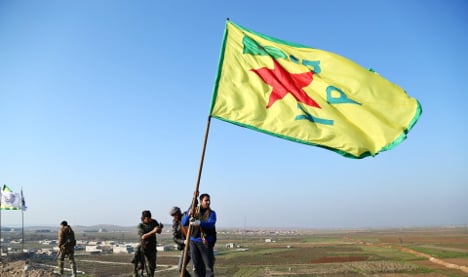 Bild reported that her fellow fighters said Ivana Hoffmann died at 3 am during skirmishes with Isis in the Tel Temir region, 200 kilometres east of Kobane.

Hoffmann was stationed with a battalion of international fighters at a set of defensive barricades when she died.

According to the report from her co-fighters, she defended the position “until her last bullet.” During the skirmish “dozens of Isis fighters” were killed, and the attack was successfully deflected, her battalion said.

Bild reports that little is known about Germany's first victim of the war with Isis.

Born in Germany on September 1st, 1995, she was of African heritage. She became involved with the communist movement and travelled to Turkey, where she joined the MLKP, Turkey's communist party.

According to her co-fighters she fought for six months alongside the Kurdish militias.

In a Youtube video reported to show Hoffmann, a young woman appears on camera wearing military garb, her face covered by a bandanna, holding an automatic weapon in her right hand.

“We've been here for a week,” says the woman in German. She explains her reasons for being there as wanting to “fight for humanity” and “fight for freedom.”

News of the German woman's death, which was not immediately confirmed by Berlin, came on International Women's Day.

Women account for around 35 percent of the fighting force of the Kurdish People's Protection Units (YPG), numbering around 7,000, and they receive the same training as their male comrades.

There are said to be dozens of Westerners in the region fighting on the side of the Kurdish militias against Isis.

Meanwhile, Germany's military counter-intelligence (MAD) unit has warned of the danger that Islamists are exploiting the Bundeswehr (German Army) to train them in combat techniques.

“We are aware of the risk that the Bundeswehr is being misused as a training camp by Islamists who are prepared to use violence,” Christof Gramm, the President of MAD, told Die Welt.

More than 20 former Bundeswehr soldiers have already been identified who have travelled to Syria and Iraq, said Gramm. He did not say how many Islamists have been found in the Bundeswehr.

In total 400 inquiries have taken place against soldiers suspected of extremist beliefs, however the majority of these have been suspected of holding extreme right wing beliefs.

At the end of February, a court process started in Aachen, where an ex-soldier is suing the Bundeswehr for dismissing him on suspicion of being a Salafist.