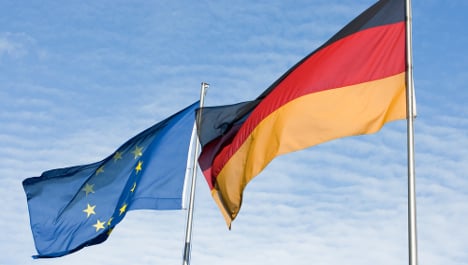 Among Germans, 69 percent told Gallup pollsters that they “approve” of the EU leadership's job performance in 2014.

That was well above the average approval rating of 49 percent across all member states, while just three other countries – Ireland, Belgium and Luxembourg – topped 60 percent approval.

“[The results] might be an indication that some Germans now start to identify leadership within the European Union with their own government and with the Chancellor [Angela Merkel] herself, of whom they very much approve at the moment,” Professor Michael Wohlgemuth of think tank Open Europe Berlin told The Local.

He pointed out Merkel's leading role in both economic and foreign policy in the past year.

Seeing her take the lead in dealing with the Greek debt crisis and tackling Russian aggression in Ukraine have likely helped Germans conflate their own country's policy with that of the EU.

But Wohlgemuth also points out that confidence in EU leadership may only be as robust as the German economy.

“If you look at growth, business confidence and certainly the labour market, people don't feel the need to blame the European Union or anything. We feel good compared to other member states,” he said.

“If the situation in Greece turns bad, at some time it might declare a default and people would see, whoops, after all we will have to pay.”

That would be a serious blow to Germans' belief in the good management of the EU and the Eurozone, Wohlgemuth said.

Pollsters at Gallup agree, saying in their report that “economic perceptions are an important part of EU attitudes.

“Europeans who evaluate economic conditions as good or excellent are almost twice as likely to approve of the EU's leadership and considerably more likely to want their country to stay in the EU as those who view conditions as poor," the report said.

They anticipate that stronger predicted growth of 1.3 percent for the eurozone in 2015 should boost the Union's standing among citizens of member states.

Majorities in half the 28 EU countries approved of the way the EU was led: those favourable are largely found in the wealthier northern and western nations.

But Britain and France, mainstays of the Union's economic power and each representing more than a tenth of its population, were far more sceptical, giving just 35 percent and 42 percent approval, respectively.

Only 28 percent of French people and 23 percent of Brits thought that their country's EU membership had left them better off than they were five years ago.

Unsurprisingly given the perception among its citizens of being ruled by unpopular policies from Brussels and Berlin, Greece trailed the table with just 23 percent approval.

Other countries which suffered through the economic crisis and are now showing renewed signs of life, such as Ireland and Portugal, rebounded to pre-2012 levels of approval.

But Spain, which has yet to return to an economic even keel – and where left-wing populists Podemos are hoping to ape the success of Greece's Syriza in December elections – showed less than half of respondents in favour of how the EU is run.

All 16 countries the pollsters surveyed by telephone wanted to remain in the EU – even those with high rates of disapproval of how the EU was run.

In Germany, 87 percent were in favour, second only to the Irish – at 88 percent – in their enthusiasm.

But 73 percent of the French and 60 percent in Britain were also keen to remain a part of the Union.