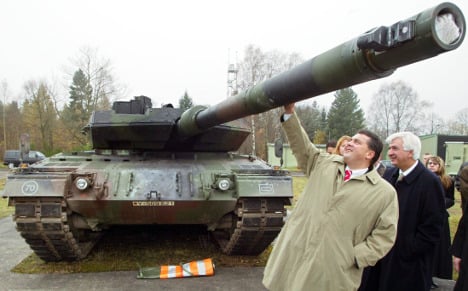 Germany has been reducing its number of Leopard 2 battle tanks from its Cold War height of 3,500, projected to fall to 225 under current plans.

But the Süddeutsche Zeitung reported on Thursday that that number may be revised upwards, along with numbers of other weapons systems.

A spokesman for Defence Minister Ursula von der Leyen confirmed to the paper that “modernization and supplementary steps are being considered”.

Enlarging existing armoured capacity would entail taking Cold War-era tanks out of storage, rather than buying new ones.

The Bundeswehr (German army) is currently only 75 percent equipped with tanks and other heavy weapons, with equipment shared between different units as and when they need it under a so-called “Dynamic availability management” system.

A Defence Ministry spokesman admitted this week that the process was “in practice just as bad as it sounds” after it led last week to soldiers using broom handles as mock machine guns during a Nato exercise. There are no plans to increase the actual size of the army, but rather to fill these supply gaps – fulfilling a long-held demand of soldiers and political defence specialists.

But von der Leyen's spokesman said that the changes were “not about a process for the coming months, but for the coming decade” and would not be included in the 2016 budget. Wieker promised to report on the impact of the current “availability management” system on the Bundeswehr's ability to fulfil its Nato obligations.

“If we want to present a credible allied defence for Europe, the troops have to be fully equipped,” defence committee chairman Hans-Peter Bartels said.

Bartels suggested that the country should aim to field around 300 battle tanks in future – something that could be achieved at little cost, as many of the vehicles are still in storage.

Christian Democratic Union (CDU) defence spokesman Hennig Otte told Reuters that “given the background of the security situation”, Germany would have to aim for “full equipment with heavy weapons” – and the financial means to achieve it.