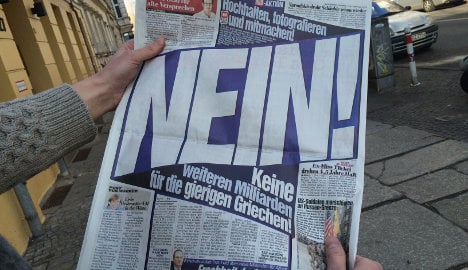 The paper also prominently quoted earlier promises by top Greek officials that "Germany will get its money back, and with high interest", adding "No one believes it any more!"
People from across Europe reacted angrily on Twitter, with one Greek responding to Bild with a picture of German soldiers executing Soviet partisans during the Second World War.

@bild this is my selfie for your NEIN pic.twitter.com/q8ysWduww0

And there were the beginnings of a campaign among pro-Greece Germans to post their own selfies saying "NEIN" to Bild.

In etwa so, @BILD? pic.twitter.com/aLNnId9s5V

CDU hardliners maintain resistance
Although Greece's bailout package looks set for approval by parliament, its passage will be marked by internal growling within the CDU/CSU alliance in Germany's ruling coalition, a trial vote showed on Thursday.
Twenty-two of the 311 MPs voted against renewing the financial aid programme for Greece ahead of Friday's crucial parliamentary vote on the issue, with five abstentions, Spiegel Online reported.
The whole of the Bundestag (German parliament) will now decide whether Germany will support an extension to the current financial assistance to Greece, which expires on February 28.
Parliaments in several other countries must also accept the aid proposals by the end of the week if Greece is to avoid missing debt repayments.
Rejecting the package will push Greece towards bankruptcy and a possible exit from the Euro single currency. This would potentially come at a cost of billions to the country's creditors, who have already lent Greece €240 billion, and written down debt of €100 billion.
Together with the Christian Socialist Union (CSU), Chancellor Angela Merkel's Christian Democratic Union (CDU) and its Social Democratic Party (SPD) coalition partner control 80% of the vote in the house.
With a general consensus having been reached on the issue, this essentially guarantees passage of the Greek aid programme.
But Germany has kept the pressure on Greece, with strong statements that the new government of Prime Minister Alexis Tsipras must meet the pledges of its existing bail-out programme.
Finance Minister Wolfgang Schäuble said on Wednesday that Athens would not  receive "a single euro" until it does so.
Tsipras and his Finance Minister Yanis Yaroufakis are struggling to balance a deal that can satisfy both the Greek electorate and the country's foreign creditors.
Their Syriza party was largely elected in January on a promise to ease harsh austerity measures demanded by foreign lenders.
SEE ALSO: Wolfgang Schäuble: Merkel's Euro bad cop