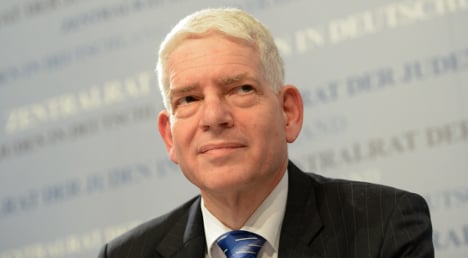 Josef Schuster, president of the Central Council of Jews in Germany. Photo: DPA

“Hiding isn't the answer,” Shuster told rbb radio. “The question is… whether it makes sense for Jews to make themselves recognizable by wearing a kippah (skull cap) in what I would call problem neighbourhoods.”

Schuster clarified that he meant “neighbourhoods with a large proportion of Muslims in the population”, and pointed to Berlin as a city with an especially large number of such areas.

“This is a development that I didn't expect five years ago and which is certainly a little horrifying,” he added.

Terry Swartzberg, a Munich-based journalist and community leader who has made a point of wearing the kippah every day for the past two years, said Schuster's comments didn't match his experience.

“I've worn the kippah in places like [southern Berlin district] Neukölln. I walked through there a couple of years ago and nothing's happened to me. I've been to a lot of supposedly dangerous areas,” he told The Local.

“We just walked through the Bahnhofviertel here [in Munich] and we were sitting in a Turkish falafel place, no problem,” he added.

Swartzberg feels that if anything, Germany has become safer for Jews in recent years because of rising prosperity.

“Because Germany seems so well financially, everyone is profiting from that,” he said.

“All my Muslim friends are very hard-working and doing very well.”

Schuster was speaking in advance of a Jewish Youth Congress in Berlin, where 350 young Jews will discuss a range of topics including German-Israeli relations.

The young people will also meet with representatives from the Bundeswehr (German armed forces) and the Israeli Defence Force (IDF), as well as Verfassungsschutz (Internal Security) chief Hans-Georg Maaßen and politicians from all German parties.

But he said that “it's definitely necessary to improve a bit the technical possibilities of security in smaller and medium-sized [Jewish] communities that aren't in the centre of things.”

SEE ALSO: Fearlessly Jewish on the streets of Munich