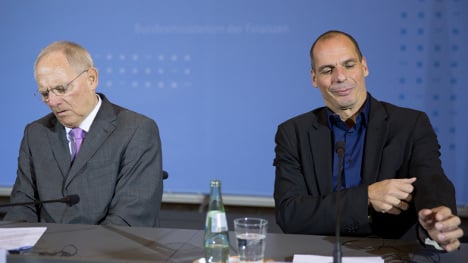 "I do not have to tell you it's quite complicated…. There is still reason for some optimism but it is very difficult," Dijsselbloem, who is also Dutch finance minister, said as officials worked to resolve the Greece-Germany stand-off before a meeting of all 19 eurozone finance ministers.

The goal of the meetings, known as confessionals in EU jargon, was to lay the groundwork for a fruitful meeting of the Eurogroup's 19 ministers, who were originally meant to begin their meeting at 15:00 (14:00 GMT), but were later rescheduled an hour later.

The discussions are on a new package of concessions" beyond those offered in a letter from Athens requesting an extension to its bailout with the eurozone that expires at the end of the month.

Arriving for the talks, Varoufakis said he hoped for a deal, given the effort made by Athens.

"The Greek government has gone not the extra mile but an extra ten miles and now we are expecting our partners to meet us not half way, but one fifth of the way," he said.

The spokesman for European Commission head Jean-Claude Juncker said "we are confident a deal is possible in the forseeable future if everyone is reasonable."

"We are not there yet," added spokesman Margaritis Schinas. Any Eurogroup decision must be unanimous.

Meeting in Paris Friday with French President Francois Hollande, Merkel said the German position "since the beginning of the Greek programme" had been that Greece remain in the bloc and added that Berlin "would do everything to continue along this path."

The German government had earlier appeared to open the door to a last-minute deal between Athens  and its creditors, saying on Friday that Greece's request for a loan extension from its eurozone partners provided "a starting point" for more talks.

"From the German government's point of view, (the request) is still not sufficient," said Christiane Wirtz, spokeswoman for Chancellor Angela Merkel.

But "it certainly offers a starting point for further talks."

Reuters cited an anonymous Greek official on Thursday who was confident that a deal would be reached,saying that Greece had “covered four fifths of the distance” by making compromises.

“They also need to need to cover one fifth,” he added, saying that Greece would not back down to pressure from the Eurogroup.

Meanwhile, there were reports that the European Central Bank (ECB) was preparing for a Greek exit from the single currency.

Spiegel reported on Friday that staff at the ECB were preparing to put plans for a Greek exit – known as "Grexit" – into action should the negotiations fail.

Meanwhile, bankers there were also putting pressure on the Greeks to introduce capital controls limiting the movement of money, with more than €1 billion being transferred out of the country each day, Spiegel said.

“I'm happy that Greece has made it clear that they want a new programme. I don't think we should say yes or no too quickly,” he said on Thursday.

But Bild reported on Friday morning that Gabriel didn't believe the current Greek offer went far enough in offering assurances to the country's creditors, quashing hopes of creating a split in the German government.

Greek finance minister Yanis Varoufakis had asked on Thursday for a six-month extension of financial aid to his country, agreeing to accept further oversight from the EU, European Central Bank (ECB), and the International Monetary Fund (IMF).

The offer was immediately rejected by a spokesman for German finance minister Wolfgang Schäuble.

Greece is running short on time to find a deal with other Europeans, with the country likely to be unable to pay its debts after existing bailout arrangements expire at the end of February.