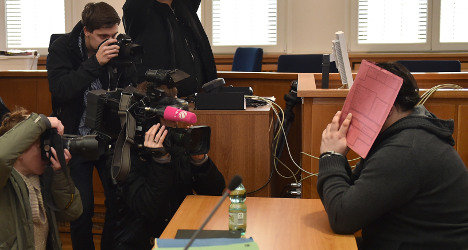 The accused hiding his face from press photographers at his hearing. Photo: DPA

“I am truly sorry,” the 38-year-old accused told the state court in Oldenburg, adding that his crimes were “inexcusable”.

“There was excitement and a sense of expectation for what would happen,” he said when asked to explain his motivation for the crimes.

Successful revivals of patients whose hearts had stopped made him feel good, he added.

While patients' deaths were “devastating” and always left him intent on stopping his abuse of his position, he always returned to his deadly habit after the guilt “faded with time”.

He is standing trial for five cases, including three cases of murder and two attempted murders – although he has admitted to 90 separate attacks on patients, up to 30 of whom died.

If found guilty, the nurse may stand trial for further murders.

A special police squad is investigating more than 200 deaths during the man's service in Delmenhorst, Oldenburg and Wilhelmshaven – all towns in the Bremen area in Lower Saxony.

But he claims that he didn't harm any patients outside the Delmenhorst Clinic.