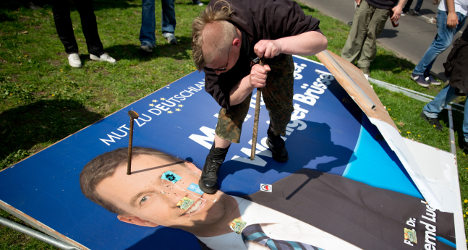 A demonstrator destroying an AfD poster in Berlin in April 2014. Photo: DPA

Vandals, described by the AfD as 'left-wing radicals', are thought to have defaced, destroyed or stolen a large number of posters put up by the far-right party during the recent city elections.

But a police spokeswoman told The Local on Tuesday that "according to our current information, it wasn't an organized group."

"It's more likely to have been individuals who tore down or defaced the posters," she said.

There have been 179 reports of destroyed posters, mostly from the parties and from officers on the beat, a police spokesman said on Monday.

Some of the party's slogans featured on the local election posters included "Stop Islamists", and "Immigration needs strict regulation".

Radio Hamburg reported that several vandals had been caught in the act and may face fines or up to two years in prison for property damage.

AfD made clear progress in Hamburg with 6 percent of the vote on Sunday, but failed to recreate the kind of results previously seen in Saxony, Thuringia, and Brandenburg, where they managed up to 12%.