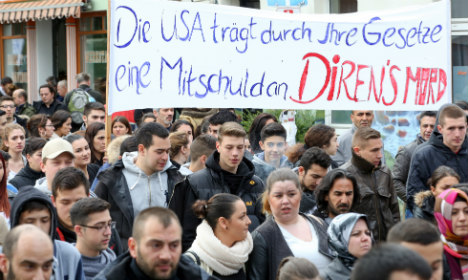 A protest march in Hamburg following Diren Dede's death. The banner reads: The USA is also to blame for Diren's murder through its laws. Photo: DPA

District Judge Ed McLean told Markus Kaarma, 30, that he "went hunting" rather than merely protecting his home when he killed Diren Dede last April after the 17-year-old wandered into Kaarma's garage in the small town of Missoula, Montana.

"It brings me to the conclusion that you're just not a very nice person," McLean told Kaarma, who was convicted in December of deliberate homicide and will be eligible for parole after serving 20 years.

"You're not killing to protect your family… you're angry at the world."

On the night of the fatal shooting, Dede and a fellow exchange student from Ecuador were strolling through the neighborhood when the German teen decided to explore Kaarma's open garage, apparently looking for alcohol.

After two earlier burglaries, Kaarma had installed motion detectors, which alerted him to the presence of an intruder.

He grabbed his shotgun, went outside and fired several times into the dark garage, fatally wounding Dede.

Kaarma's attorneys invoked a local law known as the "Castle Doctrine" that allows homeowners to use deadly force to defend themselves and their families from bodily harm or to prevent a violent crime.

But a jury convicted the shooter following the prosecution's argument that Kaarma and his girlfriend purposely left the garage open to trap an intruder.

Kaarma, wearing handcuffs and an orange prison jumpsuit, said he was sorry for Dede's death but defended his actions.

"I felt I did what was necessary to protect my family and myself," he insisted in a brief statement.

"I don't know how to find words to express my sadness," she said.

"It's too late," Dede's father Celal replied from the courtroom.