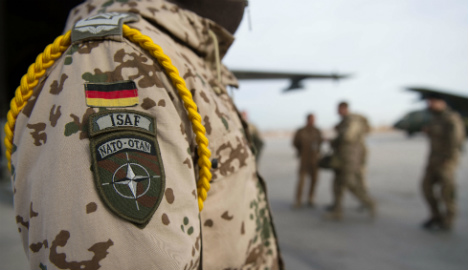 A further 214 soldiers sough psychological help for other illnesses like depression or anxiety disorders. All but 50 of those cases were newly diagnosed in 2014 – a rise of 20 over 2013.

In total, the Bundeswehr is dealing with 627 soldiers suffering from psychological illnesses, a rise of 25.6 percent over 2013.

A spokeswoman for the Defence Ministry said that the  increase in numbers had more to do with decreasing stigma around PTSD than an increase in stress facing Bundeswehr soldiers.

"Awareness surrounding the issue has increased while the stigmatisation of those affected has decreased," she told the paper. "That is the reason for this increase in numbers."

The Bundeswehr also said that the increased number of soldiers returning home from active duty also contributed to the rise of reported PTSD cases. Soldiers can only seek help when they are back in Germany.

However, the defence spokeswoman for the opposition Left Party (Die Linke) said that is was a cost of war.

The Bundeswehr only started keeping track of the number of soldiers with PTSD in 2012, which saw Germany's heaviest involvement in the fight against the Taliban in Afghanistan.

Since that year, troops have been withdrawing from the region.

Currently, there are around 850 Bundeswehr soldiers in Afghanistan training local forces.

PARTNER CONTENT
Living abroad: how can you assess your mental health?
Url copied to clipboard!