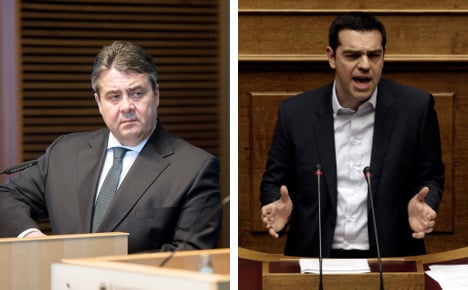 "The likelihood is zero," Sigmar Gabriel, who is also Germany's vice-chancellor, said at a gathering of the Social Democratic Party (SPD) in Brandenburg state near Berlin.

He was responding to Greek Prime Minister Alexis Tsipras, who said in parliament late Sunday that his country had a "moral obligation" to claim payment from Germany for a forced wartime loan and other reparations.

Berlin rejects such requests nearly 70 years after the end of the war, during which the Nazis occupied Greece for four years and forced the Greek central bank to give the Third Reich a loan that financially ruined the country.

Figures from some sources in Athens put the amount still owed by Germany at around €162 billion, or more than half the level of debt that Greece is currently struggling with.

Gabriel said that a line had been drawn under "all these issues" in legal terms, "at the latest" when the two former Germanys signed a treaty with the Allies in 1990, which is considered the formal end of World War II.

"There's no sense continuing down this road," he added.

Meanwhile, Finance Minister Wolfgang Schäuble said on Monday that Greece needs to agree a full programme with its creditors if it wants to secure European financial help for its debt crisis.

His comments came hot on the heels of a tense meeting with Greek finance minister Yanis Varoufakis in Berlin on Thursday, at which the two sides "agreed to disagree".

"If they want our help, there needs to be a programme" agreed with creditors, rather than the emergency assistance that Athens has called for, he said, after arriving at a G20 meeting in Istanbul.

"I still don't understand how they (Greece) want to do it," he added.

"I am ready to give all the help that is wanted but if they do not want my help then very well," he said.

Tsipras, on a visit to Vienna on Monday, told a press conference alongside Austria's Chancellor Werner Faymann: "There is a common desire to resolve this crisis.

"I am optimistic that we will reach a compromise with our European partners."