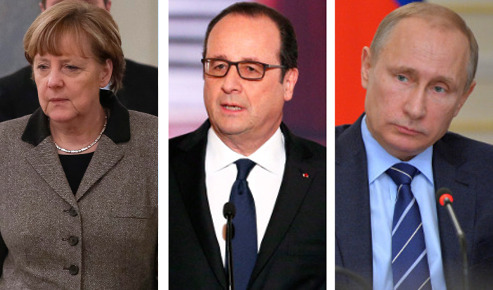 Merkel said that the two EU leaders, who will later Friday try to secure Russian support for a peace plan, were not acting merely as "neutral intermediaries".

"It's about representing our interests, German-French but also European interests… it's about European peace… and the free self-determination of peoples, which is part of this European framework for peace," she told a joint press conference with the Iraqi Prime Minister Haider al-Abadi.

Merkel also said she wanted to make clear that she would never deal with any "territorial question" over the head of another country, after a media report Thursday – already denied by Berlin – that the French-German plan involved giving separatists greater autonomy and territory they have captured in recent days.

"It is a task of each country to conduct these negotiations," she said.

Merkel said that through their visits to Kiev on Thursday and the imminent trip to Moscow, she and Hollande were seeking an end to the bloodshed as soon as possible and to revive the widely flouted truce accord agreed in Minsk last
September.

And she acknowledged the effort was open-ended but stressed the need to do everything possible to try to quell surging separatist violence in eastern Ukraine.

"We know that it is completely open as to whether we'll succeed in achieving a ceasefire through these talks.

"We don't know whether that will succeed today, whether perhaps further talks on it are necessary," she said.

For his part, Hollande said Friday he was travelling to Moscow with Merkel to "seek a deal" to resolve the conflict in Ukraine.