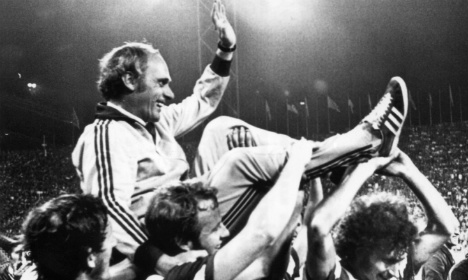 Udo Lattek as coach for Bayern Munich in 1972. Photo: DPA

He passed away at a nursing home in Cologne and is survived by his wife and two daughters.

Lattek led Bayern Munich to their 1974 European Cup triumph and to three straight German league titles between 1972 until 1974.

He then steered Borussia Mönchengladbach to the 1979 Uefa Cup and the German league titles in 1976 and 1977 before taking his Midas touch to Spain where he won the 1982 European Cup Winners' Cup with Barcelona.

In total, he won 14 titles at the three clubs and along with Giovanni Trapattoni is the only coach to have won all three major European club titles.

"It is with deep sadness that I learnt of Udo Lattek's death," Fifa president Sepp Blatter tweeted in German. "A coaching legend has passed away. My condolences to his family."

Wolfgang Niersbach, the president of the German Football Association (DFB), led the tributes from across Germany's football community.

"Udo Lattek was not only the most successful coach in the Bundesliga's history, but an outstanding personality of German football," he said.

"In 2012, the DFB honoured him for his life's work, because he had a decisive influence over decades of football.

"He will be remembered for the championships and titles he won as well as for his direct, but always endearing manner.

"Udo Lattek was a living legend, he will be missed."

Before Wednesday night's game in Cologne between 1.FC Köln and Stuttgart, the Rhein Energie stadium observed a minute of silence for Lattek.