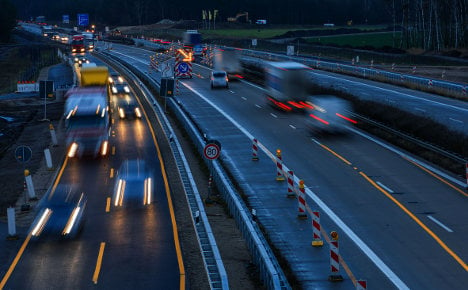 Hopefully there won't be any roadworks on the test stretch. Photo: DPA

"We will set up a test stretch on the A9 Autobahn" Dobrindt told the Frankfurter Allgemeine Zeitung in an interview, adding that the first steps towards the "Digital Testing Ground Autobahn" project would be taken this year.

Under Dobrindt's plan, the upgraded road will offer infrastructure allowing the cars to communicate with the road and with other vehicles around them.

"Cars with assisted driving and later fully-automated cars will be able to drive there", Dobrindt said.

"The German car industry will also be able to be world leaders in digital cars".

He added that "German manufacturers won't rely on Google" – the current leader in the field – to produce their own self-driving vehicles.

Dobrindt hopes that the new test route will boost already-impressive German efforts such as an Audi self-driving car shown off recently at the Consumer Electronics Expo in Las Vegas.

"We have to arm ourselves against a monopolization of data… create a digital sovereignty independent of America and Asia".

Dobrindt added that he also wanted to invest federal funds in boosting German internet infrastructure, offering high-speed broadband even to rural areas with a cash injection "in the billions".

"Germany is achieving the greatest momentum compared among EU countries in extending its networks. That's how we'll outperform our European neighbours", he said.