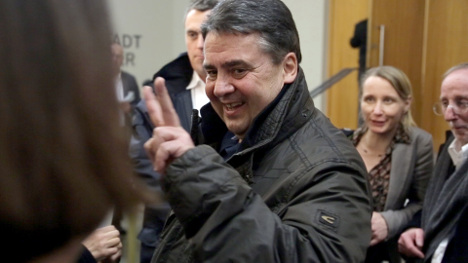 "It's right to listen and enter into a conversation with one another, and to disagree when necessary", Social Democratic Party (SPD) deputy leader and Integration Commissioner Aydan Özoguz told the Ruhr Nachrichten on Monday.

"That's a part of democracy".

"I don't debate with the far right", co-deputy leader Ralf Stegner said, "but we should face up to the confrontation with right-wing populists".

Gabriel's meeting with Pegida members came shortly before the movement took to Dresden's streets for a 14th time on Sunday.

They assembled 17,000 people, around 8,000 fewer than joined their last demonstration on January 12th.

Foreign Minister Frank-Walter Steinmeier warned on Sunday that the Pegida demonstrations were damaging the country's image abroad, telling Bild that "we have to say clearly and distinctly: Pegida doesn't speak for Germany".

And Defence Minister Ursula von der Leyen argued that "only from dialogue do the different positions and arguments become clear, including places where Pegida has no answers".

But Bodo Ramelow, the Left (Linke) Party's only state president, argued that there was "no reason for a privileged line of communication to the far-right".

And Green party leader Simone Peter argued that Gabriel had "enhanced Pegida's status" by speaking with them, something she called "utterly wrong".