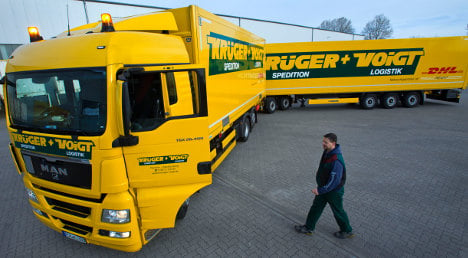 Gigaliner trucks are currently not allowed to be used on all German roads. The government has been conducting a field trial of about 100 of the trucks on certain roadways since 2012 and was set to continue until 2016, but Dobrindt is calling for more to be used before then, the Süddeutsche Zeitung reported Thursday.

Long trucks weigh about as much as regular trucks, 40 tons, but at more than 25 meters in length, they are 7.5 metres longer than regular trucks, becoming greater obstacles for fellow drivers.

Dobrindt's support for more super-trucks has raised the ire of environmental groups concerned about safety and extra road use.

Though they able to carry more cargo at a time, reducing the number of regular trucks needed, opponents said they also may encourage more use of the roads to transport goods, rather than the more eco-friendly waterways and trains.

"The goal of reducing roadway use is thwarted if super-trucks make road transport cheaper," a spokeswoman for the environmentally-minded Transportation Club Germany (VCD) told Süddeutsche Zeitung.

The rail industry, which fears losing business to the gigaliners, also reacted with annoyance to the announcement.

"If the transportation minister has already endorsed the regular operation of extra-long trucks, shortly after half-way through the field trial, then scientific monitoring has finally become a farce," said Dirk Flege, director of the group "Pro-Rail Alliance," a lobbying association representing a cross-section of the industry.

Others have said the field trial should be allowed to run its course before introducing more super-trucks.

"There are still many unanswered questions," said a spokesman for Winfried Hermann, transportation minister of Baden-Württemberg, through which some of the trial trucks are running. "We remain skeptical."

According to a report last year by the Federal Motorway Research Institute (BAST), long trucks have a cost advantage of about 16 percent over regular trucks.

The report states that two trips by a long truck is equivalent to a little more than three trips by a conventional one.

Dobrindt argues that fewer trips would mean a reduction in highway maintenance costs and the trucks would also save up to 25 percent of the fuel used by their normal-sized brethren.