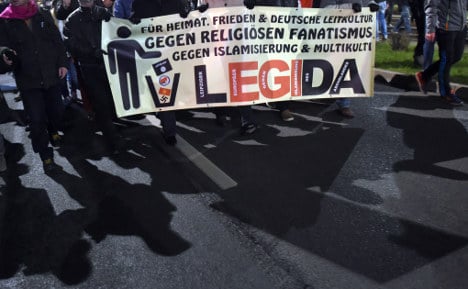 Legida – an off-shoot of Dresden-based anti-Islam movement Pegida – also assaulted journalists, spitting on them and destroying photo equipment, to the Leipziger Volkszeitung reported.

Around 15,000 Legida supporters showed up to march from Leipzig's Augustusplatz to the inner city – much less than the 60,000 originally announced by the group's organizers. Many of the marchers traveled from Dresden.

Fights also broke out between Legida and counter-protestors, who outnumbered the anti-Islam group with 20,000 people.

A police spokesman said there were "problems“ figuring out who belonged to which camp. Around 4,000 police recruited from all over Germany were deployed to keep the two marches apart.

A fire laid in railway cable ducts, as well as two attacks in the main Leipzig railway tunnel, were also thought to be connected to the Legida demonstration, a spokeswoman from the Deutsche Bahn said.

But both city trains and long-distance trains were slowly getting back to normal service, she said.

Pegida spokesperson Kathrin Oertel said the group was distancing itself from the Leipzig movement, as its organisers have not backed Pegida's list of demands.

"Everything that is said and demanded in Leipzig has not been coordinated with us,“ Oertel said.

"That may prove counterproductive for the unified image of our movement.“

Pegida is also looking into an injunction against Legida, the Dresden-based group said.

Pegida will have to regroup after its leader Lutz Bachmann resigned on the same night as the Legida protest.

The 41-year-old stepped down after widespread outrage over photos of him dressed as Adolf Hitler surfaced on social media.