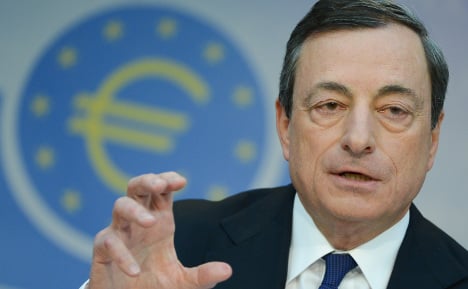 "The combined monthly purchases of public and private sector securities will amount to €60 billion" Draghi told assembled journalists at a press conference in Frankfurt.

The bond-buying programme will continue "until we see a sustained adjustment in the path of inflation which is consistent with our aim of achieving inflation rates below, but close to, two percent", he added.

Spending €60 billion a month for that long would mean the bank injecting over €1.1 trillion into the economy.

The Euro immediately dropped sharply against the US dollar on the news, to just above $1.15 – its lowest since 2003 – in a sign that the programme was more aggressive than markets had been expecting.

Draghi said that he had made the decision for the fresh round of quantitative easing (QE) "to counter two unfavourable developments."

He pointed to the sharp fall in oil prices in recent months as a "dominant factor" in low inflation, which could have knock-on effects on wages and prices.

Draghi added that there was still "economic slack" in the Euro area, with money not flowing to where it was needed.

"Today's measures will decisively underpin the firm anchoring of medium to long-term inflation expectations… financing conditions for firms and households in the Euro area will continue to improve," he said.

He added that the decision had been supported by "a large majority [of the ECB's governing council], so large we didn't need to take a vote."

The 25-strong body was "unanimous" on the principle that such a programme was a valid monetary policy tool, Draghi told a news conference after announcing that the ECB planned to buy 60 billion euros ($70 billion) of bonds per month to boost inflation.

Miniutes before, Chancellor Angela Merkel told the World Economic Forum in Davos that any action by the ECB should not ease the pressure on European politicians to enact reforms to bolster the economy.

"No matter what sort of decision the ECB will take, we should not become diverted from the fact that we as politicians need to put a framework for recovery in place," Merkel said.

"Europe continues to be confronted by great challenges. We have often talked about the crisis … we have this somewhat under control but we are not out of the woods yet," added the Chancellor.

Pressure from the German Bundesbank (central bank), political and economic establishment means that national central banks will assume most of the responsibility for losses under the programme.

But 20 percent of the assets will be part of a risk-sharing scheme among the European nations.

Draghi had to find a balance between reassuring the markets that he was doing enough to bring inflation back towards target levels, while keeping critics of QE – in which the central bank prints money to buy up debt – in Germany and elsewhere.

Michael Kenner, CEO of the German Bankers Association, told the Financial Times that the effects of QE would be "marginal", but there would be a "noticeably increased risk of asset price bubbles, of mistaken risk assessments and misdirected investment".