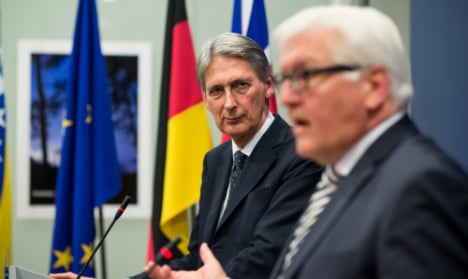 "We have urged them today to take this opportunity and not to pass what may be the best offer on the table from the European Union that Bosnia and Herzegovina will see," British Foreign Secretary Philip Hammond told reporters here.

In mid-2014 Hammond and his German counterpart Frank-Walter Steinmeier, who was in a separate visit to Sarajevo on Friday, proposed a new initiative aimed at accelerating reforms in Bosnia, necessary for its progress towards EU membership.

The proposal is to delay difficult constitutional reforms that have led Bosnia to political stalemate amid inter-ethnic disputes among the three main communities – Serb, Muslim and Croat — and to focus on desperately needed economic and social reforms.

The jobless rate in Bosnia stands at over 40 percent.

"We have urged them to act in the national interest, to put the past, to put ethnic and religious divisions behind them and to think about the country's future and progress on its path to Europe," Hammond said after meeting with Bosnia's main political leaders.

"It won't stay there forever. Because we have a whole list of problems that the European Union has to deal with," he added.

Hampering the reforms is the fact that a new government has not yet been formed after general elections last October.

With reforms having been blocked for years, Bosnia has seriously lagged behind other Western Balkans countries on the way towards the EU.

It is the only country in the region that has yet to officially apply for the status of a EU candidate country.