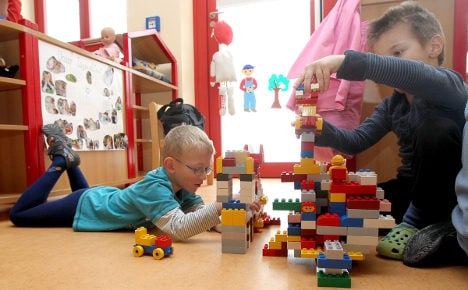 Fortunately the man's tastes did not extend to stealing lego bricks. Photo: DPA

Detectives said that the man had broken into 15 preschools in Lower Franconia and 12 in the Main-Tauber and Neckar-Odenwald areas, stealing goods worth a total of €5,000.

Officers who stopped the man's car on the night of January 1st found a laptop stolen from a kindergarten in Stangenroth, which had been broken into shortly before.

The 29-year-old driver admitted breaking into two further preschools while in a police time out before being released.

But once investigators got in touch with other police stations around the region, they realized that the man had been on a spree of thefts in different towns and villages starting on December 19th.

The man's kindergarten kleptomania extended into towns in the neighbouring state of Baden-Württemberg.

Every break-in was carried out using a similar method: gaining access by levering open a window or terrace door before searching the buildings for money – although the suspect would gladly settle for laptops, mobile phones and projectors.

In one theft in Karlstadt the man even stole a music-box from among the children's toys.

In the end, the total value of the damage the man caused to premises was much greater than the worth of the goods he stole, police said.