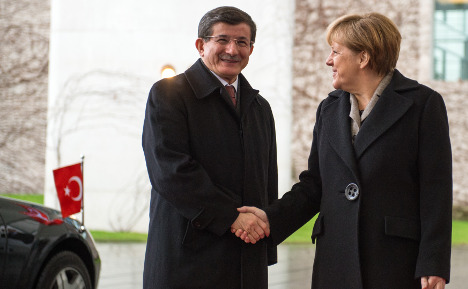 Merkel met with Turkish Prime Minister Ahmet Davutoglu in Berlin during his first visit to Germany since taking office in August.

In speeches made after the meeting, Merkel made clear her opposition to Turkey's bid to join the EU, discussed the importance of increasing dialogue among religious communities and emphasized no tolerance for violence.

"Where violence is used as a means of conflict resolution, we say very clearly 'no,'" Merkel said.

The Chancellor had previously said she would attend a planned rally on Tuesday for an 'open and tolerant' Germany, organized in the wake of last week's terror attacks in Paris that left 17 people dead.

Though Merkel has remained opposed to Turkey's admission into the EU and has condemned its administration's crackdown on protests and free speech, Davutoglu said he hoped that Turkey could "one day" join and asked for Germany's support.

Davutoglu has said that tensions between the Western and Islamic worlds are in part due to the West's resistance to admitting Turkey to the EU.

Davutoglu has also shown support for the victims of the Paris attacks, attending a rally on Sunday in Paris along with Merkel and other world leaders. The Turkish prime minister said on Monday that now more than ever, Europe must also be sensitive to discrimination against Muslims.

"We now have more than ever have the right to expect of Europe the same sensitivity in Islamophobic attacks," said Davutoglu before his Berlin visit, according Turkey's Anatolia news agency.

"It is our right to expect the same unity of world arms when people in Damascus and Gaza are being murdered. "

Merkel and Davutoglu also discussed Turkey's role in the fight against Isis, with Merkel praising Turkish efforts to reconcile with the Kurdish population. Davutoglu rejected allegations that his country has not done enough to stop people traveling through Turkey to fight with Isis.

More than 500 Germans have travelled to Iraq and Syria to fight with the group, some of whom have entered via Turkey's borders with its southern neighbours.

Davutoglu further plans to speak on Monday night to members of Berlin's Turkish population, which totals more than 200,000.