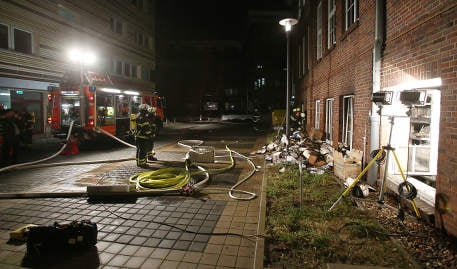 With security services on high alert after a killing spree in Paris by Islamic extremists, police in the northern German port city of Hamburg said no one was injured in the blaze at the headquarters of the regional daily Hamburger Morgenpost, which caused only slight damage.

"Rocks and then a burning object were thrown through the window," a police spokesman told AFP. "Two rooms on lower floors were damaged but the fire was put out quickly."

The regional tabloid daily, the Hamburger Morgenpost, had splashed three Charlie Hebdo cartoons on its front page after the massacre at the Paris publication, running the headline "This much freedom must be possible!"

No one was hurt in the attack, which police said occurred at about 0120 GMT. Two people were detained, while state security has opened an investigation, police said.

Whether there was a connection between the Charlie Hebdo cartoons and the attack was the "key question", the police spokesman said, adding that it was "too soon" to know for certain. Police declined to provide further information about the suspects.

No one at the Hamburger Morgenpost, known locally as the Mopo and which has a circulation of around 91,000, could immediately be reached for comment.

"Thick smoke is still hanging in the air, the police are looking for clues," the newspaper said in its online edition.

Media reports said the newspaper's publishers had ordered private security protection for the building  in the western district of Othmarschen.

German news agency DPA reported that the attack had occurred from a courtyard of the building and hit the newspaper's archive room where some records were destroyed.

It quoted a police spokeswoman as saying that the editorial team should be able to continue work in the building as the damage was relatively minor.

Two Islamic extremists stormed the offices of Charlie Hebdo on Wednesday, killing a total of 12 people including some of France's best-loved satirists. Both men were killed Friday in a standoff with police.

Several German newspapers had published the Charlie Hebdo Mohammed cartoons on their front pages Thursday in a gesture of solidarity with the French cartoonists and in defence of free speech.

Germany's Bild am Sonntag newspaper reported earlier Sunday that the bloodshed in France could signal the start of a wave of attacks in Europe, citing communications by Islamic State leaders intercepted by US intelligence.

Shortly after the bloodbath in Paris, the US National Security Agency had intercepted communications in which leaders of the jihadist group announced the next wave of attacks, the tabloid said, citing unnamed sources in the US intelligence services.