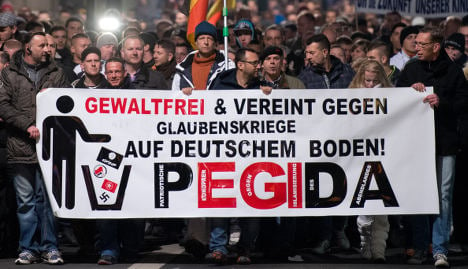 The anti-PEGIDA demonstration in Dresden on Saturday. Photo: Arno Burgi/DPA

Organisers said they estimated the turn-out at around 35,000, nearly double the 18,000 counter-demonstrators who protested last Monday against the weekly marches held in east Germany by the so-called Patriotic Europeans Against the Islamisation of the Occident (PEGIDA). The movement opposes what it claims to be the Islamisation of Europe.

"I didn't come because I am against the people going to the PEGIDA demonstrations, but because I am not afraid of people whose skin colour o customs are … different than mine," Dresden's conservative Mayor Helma Orosz said.

During the counter-protest, which included a minute of silence for the 17 victims in France, demonstrators carried signs emblazoned with the words "Help refugees", "We all laugh in the same language" and "Germany is for everyone".

Chancellor Angela Merkel deplored the rise of PEGIDA in her New Year's address, saying its leaders have "prejudice, coldness, even hatred in their hearts".

Nonetheless, in its rally planned on Monday "it is likely that there will be even more people" than the record 18,000 who joined its most recent rally, said Frank Richter, head of Dresden's civic education centre.

Victor Vincze, a senior city official on immigrants affairs, agreed that more people may be mobilised by the attacks on the Charlie Hebdo satirical magazine in France that claimed 12 lives and the subsequent deadly hostage sieges. In all, during three days of violence in and around Paris, 17 people were killed, along with three hostage takers.

Vincze told AFP that "there will be people who have stayed home so far and who will say: 'Look at what happened right in the heart of Europe, in Paris. This is not Baghdad or Sanaa. This will be emulated by others'".

Activists have announced plans for PEGIDA spin-offs in Austria and Scandinavia, while other European far-right groups have voiced support for the German movement.

Political scientist Werner Patzelt of Dresden Technical University predicted that "it is likely that the 20,000-mark for demonstrators will be reached Monday".

"The Paris attacks will without doubt give the PEGIDA movement even more momentum, he said. "PEGIDA simply says to everyone who claimed that their nightmarish vision had nothing to do with reality that they must now realise that this fear is not unjustified."

PEGIDA said on its Facebook page that the killings at Charlie Hebdo in Paris confirmed its own views.

The movement has so far failed to strongly take root outside Dresden, in the former communist East Germany. Germany, Europe's most populous country with 80 million people, is home to about four million Muslims, mostly of Turkish origin.

Several German Muslim groups have called for a silent march in Berlin on Monday to denounce violence and the risk of division of society.

President Joachim Gauck said this week that the Paris attacks "have shaken us, but not our beliefs", stressing that his message was aimed at the
perpetrators and their sympathisers, but also at "those who want to capitalise" on such tragedies.

PEGIDA has called on supporters to wear black armbands "as a sign of mourning for the terror victims in Paris" to the upcoming rally on Monday.