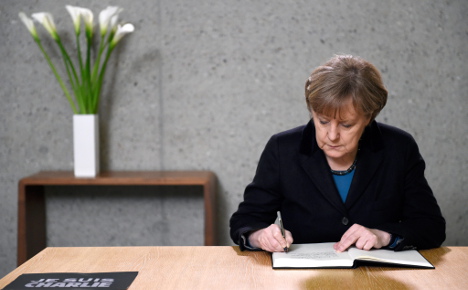 Merkel at the French Embassy in Berlin on Thursday. Photo: DPA

"Our sympathy goes to the citizens of France, especially the loved ones of the victims of this barbaric attack", Merkel wrote.

See The Local France's coverage of the ongoing situation in Paris here.

She added that Germany and France would continue to uphold the values of freedom and democracy together.

"Press freedom is an essential part of democratic societies. We will do everything to protect it", she wrote.

But yesterday also saw anti-Islam movement Pegida (Patriotic Europeans Against the Islamization of the West) called on its members to wear black armbands in their weekly demonstrations on Monday.

And in Austria, the Vienna branch of the Pegida movement announced their first ever march – scheduled for February 2 in the capital, pending police approval. Left-wing counter demonstrations were immediately announced in response.

The move came as right-wing populist party Alternativ für Deutschland (AfD) split over its reaction to the attack.

Deputy leader Alexander Gauland had said on Wednesday that the Paris attack showed that Pegida demonstrators were right to warn against "Islamization of the West", and that people who had tried to laugh them off had now been "punished for their lies by this act of violence".

Party leader Bernd Lucke tried to smooth things over by calling Islam a religion "which in the majority consists of freedom-loving, respectable people".

But the party has still called for a collective demonstration by all parties, religious communities and civil society movements in mourning for the attacks – in conjunction with a planned Pegida demonstration in Dresden on Monday.

And Interior Minister Thomas de Maizière said in an interview with ZDF television on Thursday that "we must reject all of this nonsense" from the political right in the wake of the attacks.

"It's up to us" whether the attack increases anti-Islamic feeling in Germany, de Maizière said.

Details of how to sign the book of condolence can be found here.

SEE ALSO: 57 percent of Germans feel Islam is a threat