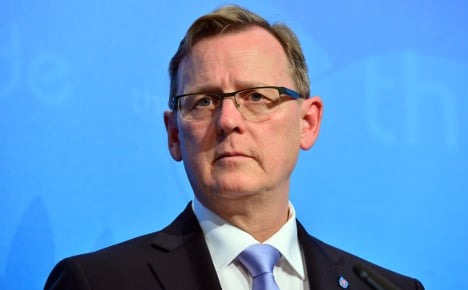 Linke (Left Party) leader in Thuringia Bodo Ramelow appeared certain to win the vote for the state presidency after concluding a deal with the Social Democratic Party (SPD) and Greens to form a "red-red-green" coalition.

But an anonymous SPD representative told local newspapers on Thursday that a CDU member sought to bribe him by offering him an office in a potential CDU-led state government – if he agreed not to vote for Ramelow.

And on Friday another SPD member came forward with accusations of bribery against a second CDU representative.

Such last-ditch dirty tricks could have succeeded in blocking Ramelow from being elected state president, as the Linke-SPD-Greens alliance has a majority of just one vote in the legislature.

Local newspapers reported that one of the CDU members was a well-known politician "who can be rated with certain influence within the CDU".

CDU spokespeople would not comment on the accusations on Thursday, saying only that bribery was "not a political tool of the CDU fraction".

The SPD, meanwhile, told DPA that while there had been rumours of the bribery it had never been discussed openly in the group.

Linke party chief Susanne Hennig-Wellsow called for the investigation into the accusations to proceed as fast as possible.