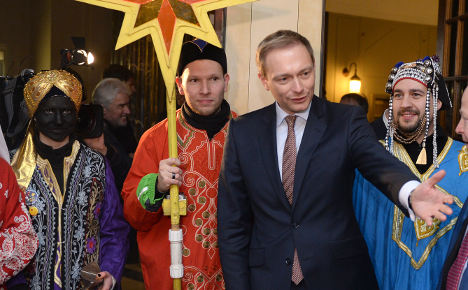 FDP leader Christian Lindner (second from right) with Sternsinger, including one in blackface. Photo: DPA

Traditionally, young 'Sternsinger' (star singers) dress up as the three kings who visit the infant Jesus in the Biblical story of the nativity – Caspar, Melchior and Balthazar – and collect money for charitable causes, often children in need.

But a member of one group, who appeared on national television with FDP leader Christian Lindner at his party's Epiphany conference, caused offence to black people in Germany by appearing in make-up as an 'African' king.

This isn't all that uncommon, as campaigners against the practice know all too well.

“There's a number of reasons why the way they perform this is problematic,” Vicky Germain of the Initiative for Black People in Germany (ISD) told The Local.

“It objectifies black people in a very racist way with the assumption that blackness is something that can be assumed.

“Teaching racism is psychologically traumatizing, not only for black kids but also for white kids. They're learning that as a non-person of colour you have this superiority, this power to determine someone's value as a human being.

“In the same way that any type of mental or psychological pressure being put on a child is, it's actually mental abuse.”

But Germain has found that people are unwilling to see the problem with blackface when confronted about it by campaigners.

“We speak to politicians, we speak to media, and there's an ongoing campaign of silent protests. Most of the time when you're speaking to people about it, you get the same things.

"Suddenly, it's no longer an institutional thing that can be addressed, practitioners and supporters make it into a personal thing so that every comment or criticism becomes a personal attack against them."

Germain argues that there has recently been a resurgence of centuries-old racism traceable back through the centuries in practices such as the Sternesinger or the “Zwarte Piet” character in Netherlands folklore.

The FDP was quick to distance itself from the singers' get-up, saying only that “we aren't responsible for the way they're dressed or made-up” and referring questions to the parish of St. Boniface in Renningen, which traditionally organizes the singers.

Church authorities there could not be reached for comment on Wednesday.