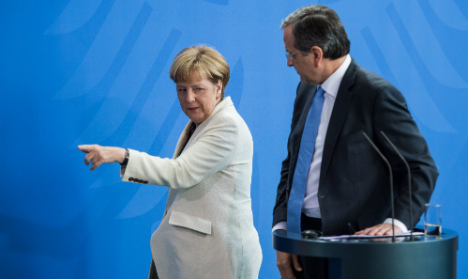 The report in the Der Spiegel daily, which cited sources close to the German government, comes as polls show a radical leftist party leading the field three weeks ahead of a snap election in Greece.

The Syriza party of Alexis Tsipras has pledged to reverse reforms imposed by Greece's international creditors and renegotiate its bailout deal.

"The German government considers a eurozone exit (by Greece) to be almost inevitable if opposition leader Alexis Tsipras leads the government after the election and abandons budgetary discipline and does not repay the country's debts," Der Spiegel reported on its website.

Both Merkel and Finance Minister Wolfgang Schäuble had come to view a potential Greek exit from the 19-currency eurozone in a less dramatic light, the report explained.

They both now felt such an outcome would be "bearable", Der Spiegel quoted unnamed sources as saying.

The recovery underway in other formerly problem economies such as Ireland and Portugal, establishment of a permanent eurozone bailout fund and creation of a banking union all bolstered Berlin's belief that the contagion from a fresh Greek crisis would be limited, the report added.

Greece's parliament was dissolved Wednesday after the assembly failed to agree on a successor to outgoing President Karolos Papoulias in three successive votes.

The dissolution of parliament triggered a snap election that will take place on January 25th.