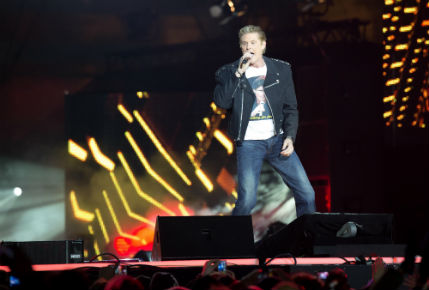 Due on stage just after midnight in front of nearly one million revellers, 'The Hoff' almost didn't make it after his private plane was forced to divert to Hanover due to fog.

Instead of relaxing backstage before his prime-time gig, the star was forced into a hectic high-speed taxi ride just to make it to the iconic landmark in the capital an hour before show-time.

Taxi-driver Cengiz Kilic told the Berliner Zeitung about his surprise last-minute star passenger – and the rush to make it to the party on time.

"My boss called me into the office and said: 'You have to bring Hasselhoff to Berlin!"

"He was very friendly, funny and nice. (Hasselhoff) wanted to speak  with me, but I do not speak English," Kilic told the paper.

"I knew of his previous films, but I did not know he sings."

The taxi left at about 8:30pm in the evening for the 290 kilometre journey, arriving at Hasselhof's luxury hotel on Potsdamer Platz just after 11pm, where three cars were waiting to whisk him to the gig.

But not before Kilic was able to get The Hoff to pose for a selfie with his saviour driver.

"We were doing about 150km an hour", Kilic revealed. "I must say, he was really nice to me." Not least, because January 1 happened to be Kilic's birthday. A generous tip was also given, according to the paper.

Hasselhoff appeared on stage just after midnight to see in the new year, where his performance of his 'Looking for Freedom' song in 1989 at the time of the fall of the Berlin Wall has made him something of a folk hero.