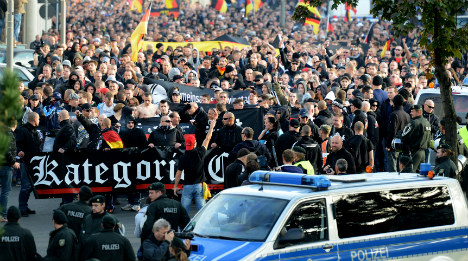 Police vs Hooligans at the October Cologne march Photo: DPA

The group claim up to 4,000 people will turn up for the demonstration, in front of the main train station on January 18th.

A similar rally by self-proclaimed hooligans, largely from the violent "ultrafans" football scene, in Cologne saw 44 police officers injured, as the used water cannon and tear gas to contain the demo.

HoGeSa announced their plans for the demo via Facebook, although the event is still subject to a police veto.

Police in Essen said a fax was sent to them on Boxing Day registering the event, which will take place on Willy Brandt Platz from 2-6pm.

Echoing the more peaceful Pegida protests in Dresden, the group have given the rally the motto: "No Islamization – Germany Against Radical Salafism".

A police spokesman told Westdeutsche Allgemeine Zeitung: "Whether the demonstration will actually take place, we don't yet know."

The police are examining possible grounds for banning the demonstration, he added, saying there should be "cooperative negotiations" with the event organiser. Officers will be asking the unnamed man exactly what is planned for January 18th.

If the rally does go ahead, a different policing approach will be required, after officers were surprised and outnumbered by the Cologne clashes.

An earlier HoGeSa demo in September in Essen saw police corral some 90 demonstrators, many of them "known violent thugs from the football scene" according to police.

One participant from that September 21 demo appears on the YouTube video. Calling himself "Kalle", he brags "We were the mighty, and we will be again."

The Cologne rally quickly spiralled out of control, with a police van overturned and bottles and stones thrown at officers, resulting in the 44 injuries.