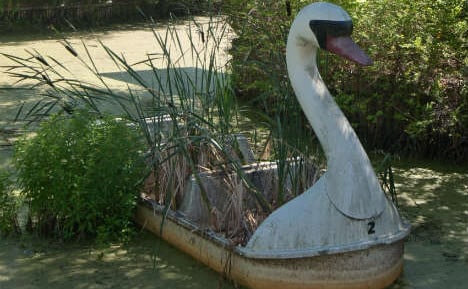 The Spreepark, with its overturned dinosaurs, rusting ferris wheel and derelict log flumes,  is on most tourists "must-see" list, and its eerie atmosphere has hosted film shoots and illegal raves alike.

Now the city authorities are applying for help from the EU to make the site safe and clean – and even open up the historic restaurant.

Just to clear the 30-acre site of toxic waste, and make safe the ferris wheel, will cost 4 million euros, said Margaret Sudhof, from the townhall's Real Estate Fund at a press conference this week.

And to restore the historically-listed 19th century "Little Egg House" restaurant would cost around 10 million euros. With the German capital some 60 billion euros in debt, the figures were unlikely to be found from townhall coffers, hence the suggestion of help from Brussels.

The themepark, on the banks of the Spree by what was East Berlin's Treptow Park,  has a bizarre and fascinating history.

It was originally built under the communists as the country's only official entertainment park. After the fall of the Berlin Wall it was snapped up by a private entrepreneur Norbert Witte, who added new rides but also hiked prices.

Visitor numbers dropped in the late 1990s and the firm went bankrupt in 2001. Witte then shipped many of the rides to Peru, in a bid to open a new entertainment park in the capital Lima. When that also failed, he attempted to smuggle some 180 kilos of cockaine back to Germany, hidden inside the Flying Carpet ride, and was sentenced to seven years in jail, along with his son.

The park then stood empty and decaying, bar adventurous tourists who broke through the flimsy security perimeter fence.

Guided tours were briefly offered in 2011, but the city government stepped in to buy the park in March this year.

A suspected double arson attack this summer destroyed much of the rotting remains of the themepark.

It took over 100 firemen more than four hours to put out the separately-set blazes, which entirely destroyed the fake Wild West town.