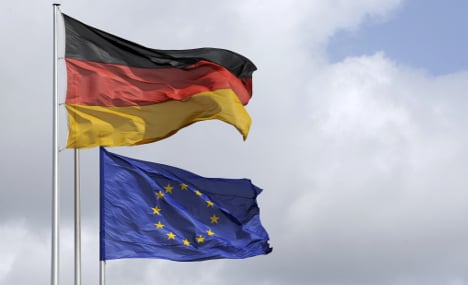 The pollsters asked people in the UK, Germany, France, Denmark, Sweden, Finland and Norway a series of questions about the European Union (EU).

If there were a referendum, 55 percent of Germans said they would definitely vote in favour of staying in the EU, compared with 43 percent of French people and just 38 percent among the British.

That made them the most favourable towards the EU of any of the countries surveyed, with Denmark the only other country with an absolute majority definitely in favour at 51 percent.

But Germans were just as worried about immigration from other EU countries as the British, with just 27 percent of residents in both states believing it had a net positive effect on their respective countries.

While similar numbers of Brits and Germans agreed on positive effects of immigration, including filling labour shortages in highly-skilled and low-paid jobs, the two countries shared concerns about immigration too.

The biggest was that EU immigrants would come to claim benefits, which worried 64 percent of people in the UK and 67 percent of Germans. Germany, France and Denmark all had similar levels of approval (70 to 73 percent) for the idea of stopping EU migrants claiming benefits in another country for a year after moving – although they were far short of the British, 83 percent of whom liked the idea.

A majority in all the countries thought people shouldn't be allowed to move to another country unless they had work lined up and could support themselves, with three-quarters of Brits and two-thirds of the Germans and French in favour.

Crime was a much bigger concern for the Germans than the British, though, with 48 percent believing EU immigrants would increase crime compared with 14 percent of people in the UK.

That was far short of the Finns, 60 percent of whom thought that EU immigrants would contribute to crime levels.

Germans are becoming very gloomy about the future by comparison, with a result of -24 on the economic optimism scale.

Recent news that economic growth is slowing might have something to do with the pessimism among the German public, as there was a positive trend in expectations until summer this year.

Despite concerns about the country's future, only 23 percent thought that they and their families would be worse off in the coming year.

Both Britain and Germany were well ahead of France in their expectations. The country had a net optimism score of -56, while 57 percent thought they would be personally hit by economic woes in the coming year.