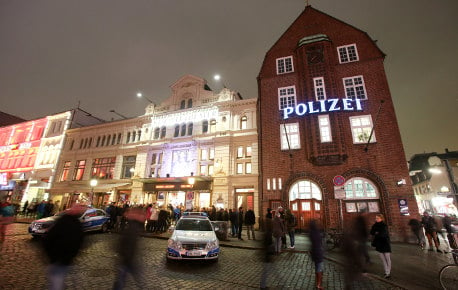 With POLIZEI splashed across the distinctive red-brick facade, the Davidwache is as eye-catching as the vivid – and lurid – nightlife of the city's famous St. Pauli district that surrounds it.

Named after the street it stands on, Davidstraße, the station has a geographical jurisdiction of less than one square kilometre.

But it has a staff of 120 to cope with the massive inflow of curious and often unruly visitors who flood the area each evening to enjoy its vibrant nightlife.

As well as the 14,000 residents, some 80,000 people come each day to the dense streets full of bars, clubs and brothels. The St. Pauli district emerged as an entertainment-rich area in the 1800s and grew steadily in the early years of the 20th century, outgrowing its original police station.

In 1913, Hamburg Mayor Fritz Schumacher ordered the construction of a new police station, which opened on December 10, 1914.

After a period of increasing underworld activity and crime, including gang wars, during the seventies and eighties, the area has seen a marked change in atmosphere in recent years.

While still a hub of the sex industry, it has become more cosmopolitan and welcoming to tourists just looking for good bars, dancing venues and live music.

But in part due to sheer numbers of visitors, the police workload has kept growing in the 21st century too. An extension was built onto the Davidwache in 2005.