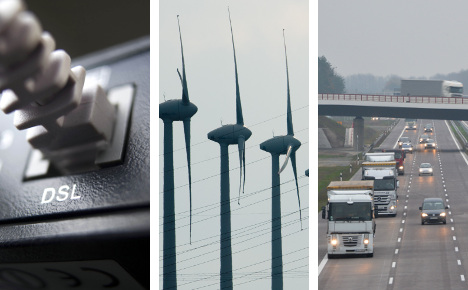 A list of European investment projects seen by the Süddeutsche Zeitung on Monday showed that private companies will be encouraged to invest €24 billion in extending Germany's broadband internet capacity.

Other big-ticket items included €13.5 billion for wind power and €10 billion for increasing the capacity of the motorway network.

With governments having little spare cash for infrastructure projects, Juncker plans to ask the European Central Bank (ECB) in Frankfurt to provide €60 billion of loans, with the remainder of the money coming from private investors.

The aim is to kick-start economies across Europe which have been struggling with low growth.

In Germany, growth forecasts for 2015 were recently slashed in half by the Bundesbank (Central Bank) to one percent.

But experts are divided over whether Juncker's programme can provide the necessary boost, in part because it will stretch over the entire coming decade – limiting the impact of the impressive-sounding total amounts.

And many of the projects have been factored into government investment plans for years, meaning that they're unlikely to provide a sudden lift in economic activity.

In Germany, projects like this include €5.4 billion of flood defences, €5 billion to connect offshore wind turbines to the power grid, and €4.9 billion to modernise hospitals.