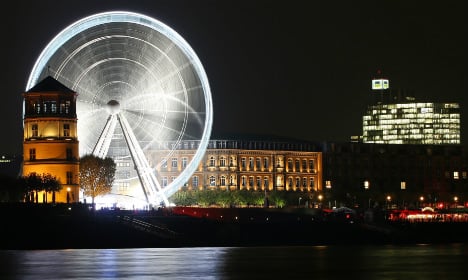 According to the Westdeutsche Allgemeine Zeitung (WAZ) on Thursday, the only thing two people who live near the Burgplatz Ferris wheel want from Saint Nick is for the 55-metre-tall Ferris wheel to dim it down.

They say it's causing their nights to be too bright, and its leaving them not at all merry.

The owners of the Ferris wheel have already agreed to turn off the 340-metre-long LED-light chain that gives their amusement park ride so much seasonal sparkle by 10 pm until the environmental bureau can do an official light measurement in the couple's apartment. .

The Bruch family have been lighting up their Ferris wheel for the last three years. WAZ reported on Friday that the complainants were living abroad for the past several years and only recently moved back into their central Düsseldorf flat.

"We want to be considerate of all parties, even though our goal is that the Ferris Wheel should remain lit past 10 pm," said a spokesperson at Düsseldorf's city hall.

Despite the complaint, the Bruch family said they see a lot of support for the shining star.

"We're glad that people have taken to the Ferris wheel and that it has become a landmark. But the light measurements still have to be done. The city will make their decision," said a Bruch family spokesperson.

The environmental bureau has said they plan on doing their measurements "as soon as possible" and that they will do so from various points at the complainants' apartment.

Depending on the findings, the city will then make a decision whether or not to permit the Ferris wheel to keep its lights on past the couple's bedtime.