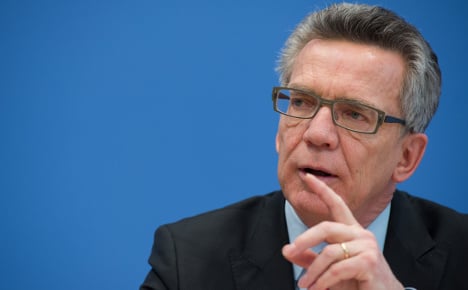 De Maizière's bill, approved by the cabinet on Wednesday, will provide certainty for at least some people who have until now been living in fear of potential deportation.

People who were not deported, either due to lack of papers, illness or other reasons, after their asylum applications were refused may be allowed to stay – if they fulfil conditions like being able to live independently and knowledge of the German language.

The new rules are expected to benefit several tens of thousands of the estimated 100,000 of such “tolerated” failed asylum seekers.

But de Maizière insists that Germany is not becoming a soft touch thanks to other provisions of the bill.

“This is a law that addresses two sides of the same coin,” he said. “[It has] a mission both to welcome and to warn people away.”

Under the draft law, foreigners without papers will be deported much more speedily if they commit crimes, for example, ending what de Maizière called an “implementation deficit” under previous legislation.

There will also be new powers to prevent people returning to the country after deportation and to keep people in custody pending their removal.

De Maizière said he wanted to bring clarity and justice to refugee policy so that the public wouldn't begin to reject the principle that people genuinely seeking asylum should be welcomed.

But refugee organization Pro Asyl said that the new law was disproportionate, and that the small extension of residency rights would be overshadowed by an increased number of bans handed out by the authorities.

The Green party called it a continuation of the “carrot-and-stick politics” that have characterized the asylum debate in recent years, while Left (Linke) politician Ulla Jelpke said that the law “read like the programme of a party from the far right of the political spectrum”.