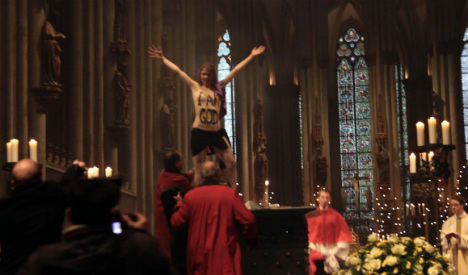 Josephine Witt's bare-all protest took place on Christmas Day 2013. She told press agency dpa that she wanted to demonstrate against the Catholic Church and its hierarchy.

“Cologne is the capital of the Catholics in Germany, and [Cardinal] Meisner stands for a very conservative orientation”, she said.

“It was a radical form of protest that might cause pain,” she told television reporters at the time. “Of course not everybody would do that.”

“Josephine Witt protested half naked during Christmas Mass in the Cologne Cathedral against the Vatican's propaganda about the criminalisation of abortion,” Femen said in a statement.

That protest took the form of jumping onto the altar with the words “I am God” painted onto her bare chest in stark black letters as red-robed officials tried to stop her.

“I'm 80 years old. I've lived through so much: first the Nazi period, then the whole Communist period – something like this can't shock me after that,” the Cardinal, who has since retired, said.

Although media reported at the time that Meisner included Witt in his prayers, he can't remember after so much time.

“It's possible”, he said. “She could really have done with it.” Witt is charged with interfering with the free exercise of religion and could be sentenced to up to three years in jail if found guilty.

A worshipper at the cathedral slapped Witt after she had been overpowered by cathedral staff, who settled a legal case over the blow for €500.

Femen compared the case to the trial against feminist activists Pussy Riot in Russia after the group conducted a protest in a Russian Orthodox church in Moscow, which led to three of them being imprisoned amid protests from Germany and other countries.

“This isn't just about the Catholic Church, it's about the free practice of religion in its widest sense, it's about living together peacefully.”

Witt also took part in a demonstration against Russian President Vladimir Putin this year and was overpowered by his bodyguards.