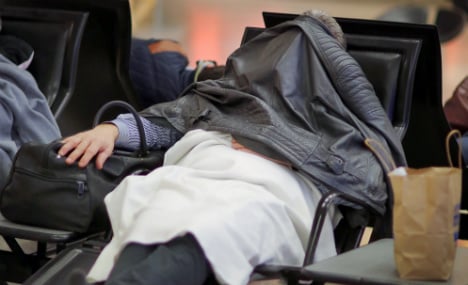 This man represents all Lufthansa passengers this week. Photo: DPA

The Vereinigung Cockpit union scheduled the new strike to start at 3.00 am on Thursday and end at one minute to midnight the same day.

The announcement was made just as a 36-hour strike that began Monday was coming to an end. That stoppage caused more than one thousand flights to be scrapped, disrupting services to and from Germany's busy Frankfurt hub, and causing disruption at Lufthansa destinations including London, Buenos Aires, Dubai, Seoul and Tel Aviv.

Short-haul and medium-haul services and those operated by Lufthansa's low-cost subsidiary Germanwings will not be affected by Thursday's strike, the union said.

The latest talks between the airline and the pilots' representatives broke down on Friday, prolonging a dispute that centres on transitional pension arrangements for about 5,400 pilots.

At present, the pilots are allowed to retire at 55 and receive up to 60 percent of their pay until they reach the statutory retirement age of 65.

Lufthansa says the combined strike action this year has so far cost it about €170 million.

Pilots say they are also concerned about the airline's future strategy, including plans for a new long-haul budget subsidiary, as Lufthansa grapples with competition chiefly from low-cost carriers.