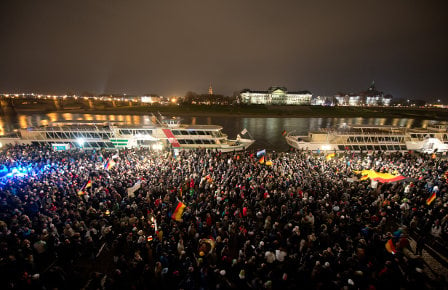 Anti-asylum policy marchers on the move in Dresden on Monday. Photo: DPA

Five hundred police officers were deployed to control the march, which drew a counter-demonstration by around 1,000 people. Police closed off key streets to keep the groups separate and avoid potentially violent clashes.

Dresden has seen successive demonstrations over what participants regard as excessive influence of Islam in Germany and Europe. Marches were called by the so-called Pegida Alliance, an abbreviation of the German for "Patriotic Europeans against the Islamization of the West".

The issues of asylum seekers and Islam have fuelled tensions in a number of cities this autumn. Numerous demonstrations took place against what participants regard as excessive influence on society by Islamic communities.

Some protests specifically targetted the Salafist branch of Islam and bids by some members to introduce aspects of Sharia law in German cities.

Forty-five people, including 44 police officers, were injured last month in Cologne during clashes with right-wing groups marching under the banner "Hooligans against Salafists".

Growing activism against Islam has also translated into hostility towards asylum seekers in Germany, many of whom come from Islamic countries.

In a recent survey, researchers at the Friedrich Ebert Foundation (FES) in Berlin found that 42 percent of respondents believed that most asylum seekers arriving in Germany were not persecuted in their homeland.