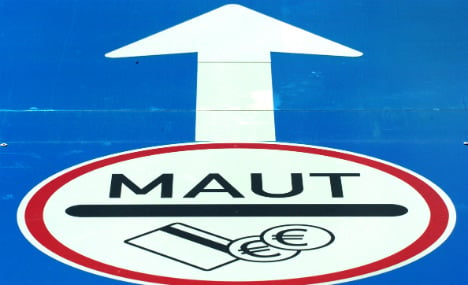 In a draft law reforming the car tax seen by the Süddeutsche Zeitung (SZ), German drivers would have their tax bill reduced by the amount they pay in tolls, meaning that they won't pay twice for the measure, which is aimed at making foreign drivers pay to use the roads.

The government is introducing the roundabout tax manoeuvre as a way of avoiding EU rules that forbid governments giving their countrymen unfair advantages over fellow EU members.

States that rely on cross-border tourism and trade are also worried that they will see fewer visitors, as travellers might be deterred from driving into Germany.

Now it has emerged that if the toll is increased to pay into a future infrastructure change, German nationals will have to pay up as well.

"The infrastructure levy and car tax are two separate systems that exist independently of one another," said a spokesman for the Transportation Ministry.

Transportation Minister Alexander Dobrindt, of the CSU – Bavarian sister party to Angela Merkel's ruling Christian Democrats – said a reform of the car tax law was necessary to accommodate the promise that Germans wouldn't end up paying more to drive when road tolls come in.

However, Green party transportation expert Valerie Wilms told SZ that that isn't what the law in its current form says.

"This is exactly the opposite of what has been promised," Wims said. "Any future rise in tolls would not then be compensated in the car tax."

The CDU'S governing partners, the Social Democrats (SPD), who have been thus far quiet in the toll fights, are now saying the proposal goes against the coalition agreement that kept the CDU in power in the last election.

"The coalition agreement is clear: There may not be any additional burden for German motorists with the toll," Thomas Opperman, the head of the SPD's parliamentary group told SZ.

"The SPD will not agree to any law reformation that will later cost more Germans through the back door."  Finance Minister Wolfgang Schäuble has had to lower the car tax in his latest budget to take into consideration what Germans might pay in tolls in the future.

"The coalition agreement is clear: There may not be any additional burden for German motorists with the toll," Thomas Opperman, the head of the SPD's parliamentary group told SZ.

"The SPD will not agree to any law reformation that will later cost more Germans through the back door."

The changes are estimated to cost around €80 million, including €43.5 million for printing and mailing out of the revised car tax statements, said Handelsblatt, which has also received a copy of the draft law.

The toll is expected to come into effect on January 1, 2016.

Dobrindt expects the tolls to bring €500 million into public coffers.