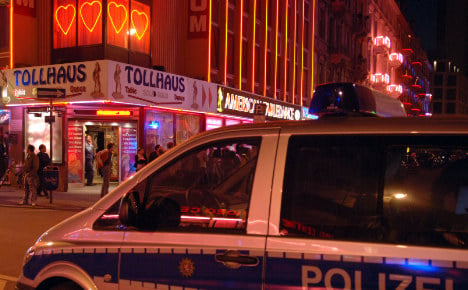 They searched four large brothels as well as five business premises, 28 private homes and 14 vehicles in raids across the four countries.

Three men and two women, aged between 21 and 49, were arrested for people trafficking for the purpose of sexual exploitation, procuration and fraud.

Stuttgart prosecutors launched the raids based on an investigation into people trafficking which had been going on since the start of the year.

They are believed to have been involved in drawing young women under the age of 21 into prostitution using the so-called “Loverboy method”.

A young man would draw them into a feigned love affair and then push them into prostitution as a way of helping him out of pretended financial hardship.

Those arrested are also accused of using threats of violence to force the young women to continue selling sex.

Several of the accused are believed to have links to biker gang United Tribunes, whose network stretches from Stuttgart to Bosnia, police said.

As well as tricking the young girls, they are believed to have borrowed money for their brothel business by tricking investors into believing they were supporting nudist (FKK) clubs.

The people taken into custody will be brought before a judge on Monday to be formally charged.