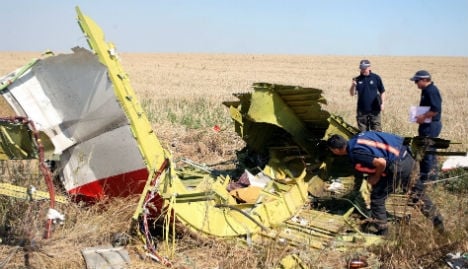 The woman, who lodged her complaint at the Strasbourg-based court "last week", is suing Ukraine for €800,000 ($1 million) in damages for negligent homicide, the Bild newspaper said.

The Boeing 777 exploded over insurgent-held east Ukraine on July 17, killing all 298 on board, 193 of them Dutch. Four were German, according to the airline.

Kiev and the West have accused separatists of shooting it down with a surface-to-air missile supplied by Russia — a charge Moscow denies.

The plaintiff in the case claims that Ukraine should have closed its airspace to civilian flights when fighting raged in the east of the country, Bild reported.

The woman argues that Ukraine chose not to close its airspace because it did not want to lose out on overflight fees.

At the time, some 700 flights were thought to be crossing Ukrainian territory per day, bringing in millions a month in revenue, Bild added.

The woman is being defended by German lawyer Elmar Giemulla, a professor of aviation law.

Giemulla announced in September he would represent three families of German victims of MH17.

"By keeping its airspace open for transit by aircraft from other countries, the state must ensure the safety of the flights. If this is temporarily impossible, it means that it should close its airspace," he told AFP at the time.