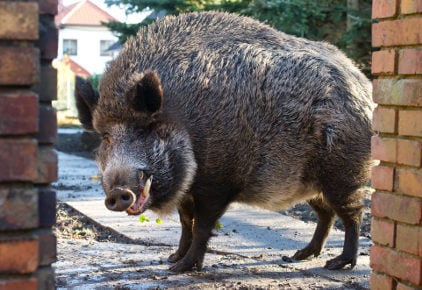 Photo: DPA
The focus should be on culling young boar before they reach reproductive age, Hinz (Greens) told the state parliament, citing the trail of destruction the animals are leaving behind them this year.
As they forage for food the boar are increasingly rampaging through maize plantations that supply organic gas installations. Farmers are also complaining that greater numbers crossing their land cause huge damage to crops, even if they don’t eat them.
Their numbers grew further after a bumper autumn yield of chestnuts, beechnuts and acorns in forests around the state, especially in and around Frankfurt.
This has had repercussions for road safety too, with more boars surprising drivers on local roads and the Autobahn in Hessen and other parts of Germany.
In October, the driver of a new Porsche on a highway in Baden-Württemberg hit one of the animals and lost control of his vehicle at high speed. The car smashed through the barriers and rebounded off a concrete wall before careening to a halt 200 metres down the road.
The boar died but the driver was unhurt, apart from his horror at the state of the car, which had only 600 kilometres on the clock: The damage was estimated at €140,000. Inquisitive boars often stray into built-up areas as well. Police in the Hessen town of Dillenberg were called earlier this month when one young animal somehow entered a building supplies store after working hours and set off the alarm while roaming the aisles.