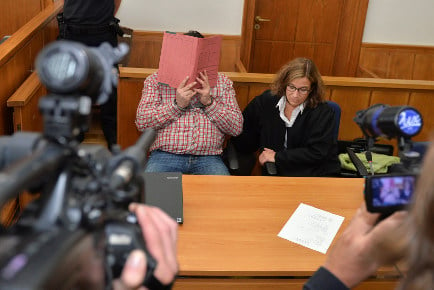 The defendant conceals his face from media during the new trial. Photo; DPA

The defendant, a 37-year-old man who admitted to injecting patients with a drug that causes heart and circulation problems between 2003 and 2005, had previously worked at a clinic in the northern town of Oldenburg.

Investigators there now say there are conclusive signs of external interference in the deaths of seven patients and that foul play was not ruled out in five more deaths.

A total of 56 patient deaths that occurred while the man worked at the Oldenburg clinic from 1999 to 2002 are now being probed. This brings the overall number of deaths under investigation at both clinics to more than 180.

Most occurred at the clinic in Delmenhorst, also in Lower Saxony, where the nurse had been regarded as a dedicated member of staff until he was found to have secretly given patients doses of Ajmaline.

The man said earlier in his trial that boredom had prompted him to administer the drug so that he could demonstrate his resuscitation skills.

He was originally jailed for seven years in 2008 on charges of attempted murder and now stands accused of causing three patient deaths.

According to witnesses, he had boasted in prison that he stopped counting after the number of dead passed 50, raising fears of a major serial killing case if verified.

"Nowhere can a serial killer practise their dreadful trade undisturbed like a hospital or care home," Eugen Brysch, the chairman of the German Foundation for Patient Care, told the news agency dpa.

After the man's earlier conviction it was found that the rate of usage of Ajmaline had increased by almost 10 times at the Delmenhorst clinic between 2001 and 2005, and the death rate had also increased.

Staff at the Oldenburg clinic expressed shock at the possibility that the nurse had harmed patients there too over several years.

"It was unthinkable that someone from our ranks could have committed such acts," the clinic's general manager Dirk Tenzer said.

New proceedings were started after a woman whose mother also died in Delmenhorst heard of the case and brought new charges against the man.

SEE ALSO: Nurse 'killed patients because he was bored'