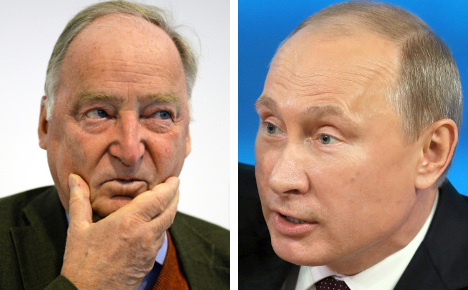 Bild reported on Monday on a document titled “Putin: the new leader of international conservatism”, in which the Moscow-based Centre for Strategic Communications lays out how the Russian leader could influence key EU member states including Germany.

The paper's authors highlight one of the AfD's financing methods – trading gold – as a way for the Kremlin to buy influence into the party. The advisors suggested the Russian government could sell gold to the party at a loss or use the Germans as a middleman for gold trading at commission as a way of filling the party's coffers.

The AfD has sold gold worth €2.1 million since October, making low profits but aim to maximise the amount of public aid – calculated according to how many votes a party wins and its other income – it receives.

Putin's experts also suggest repeating the strategy of making loans to the party, which has proved successful in France.

There, the First Czech-Russian bank loaned the far-right National Front (FN) more than €9 million – and its leaders have showered Russia with praise in return.

"Russia feels isolated," Christian Wipperfürth of foreign policy think-tank DGAP told The Local. "A lot of things have changed in West Europe and Central Europe in the last 20 years and Putin and the Russian people don't understand it.

"Russia is going back to its instinctive conservatism, as in the century before World War One."

The Ukraine crisis is a particular sore spot as in the past, "Germany and Russia have found common ground. Germany is very reluctant to take military action.

Russia hasn't agreed with German reluctance to intervene in cases like Iraq or Libya out of pacifist principle, but out of a default position of opposition to Brussels and Washington and a shared dislike for meddling in the Middle East, he said.

But Russia's clear interest in Western Europe shouldn't be taken as confirmation that it would directly fund political parties in the West, Wipperfürth argued.

"I believe it's true that Russia wants closer connections in central and western Europe, but I don't think (Russia) needs to do this."

While AfD was not present at a meeting of Russian representatives with European far-right parties in Vienna in March, the strategy paper proposes targeting the party's vice-president Alexander Gauland (73).

Gauland was an important voice in favour of a vote against EU sanctions on Russia at the AfD party conference in March 2014.

He was also a special guest of the Russian ambassador in Berlin in September as well as speaking at a pro-Russia conference on Saturday alongside Russian Railways president and Putin confidant Vladimir Yakunin.

AfD spokespeople could not be reached for comment on Monday.