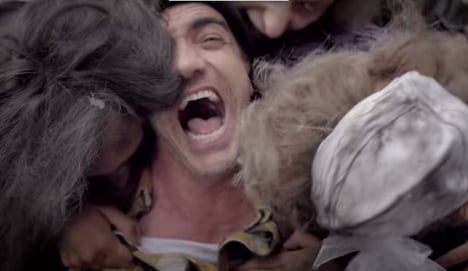 Recycling is good for the environment too! Photo: Bundesministerium für Umwelt/YouTube

The teenager comes home to find her parents locked in a passionate pose in the living room. They freeze in embarrassment and she flicks off the light switch and retreats.

The message: If every household reduces energy consumption by five percent it will save the output of one of the country's large coal-fired power stations.

Commissioned by the Environment Ministry, the "Together it's climate protection" campaign includes three 30-second videos aimed at punching the right buttons in young minds in matters of energy conservation.

A woman is playing pan pipes in her living room and shuts her window in annoyance at noise from the garden. Engrossed in her rehearsal, she does not notice that the disturbance is actually her husband being attacked and devoured by zombies.

There's no ambivalence in the clips, which were posted on November 11 and are naturally not to everyone's liking. "A disgrace for a German ministry," one viewer commented beneath the lights-off clip.

Some took it for a prank played on the ministry, while one commentator adds, "Who says German authorities have no sense of humour?"

"Cool campaign that shows that climate protection doesn't have to be a dry topic," concludes another.

Viewing figures so far suggest that the message is getting out there: More than 100,000 people watched the parents-in-flagrante clip in its first week, while the zombies racked up almost 50,000 hits by Wednesday.
Despite some complaints, the response to the campaign has been "overwhelmingly positive", a spokesman for Environment Minister Barbara Hendricks told The Local.
He put the cost of the videos and related internet projects with bloggers and other networking strands at €1.5 million. "A bit of fun must be admissible for promoting climate protection," he added.
And while viewers are reacting to the edgy content, the ministry promotes some easily digestible energy-saving tips.

If homes reduce their heating in winter by one degree, this will reduce carbon dioxideCO2 emissions by 3.5 million tons. And a lid on your cooking pot will reduce energy consumption of an electric stove by up to 30 percent.