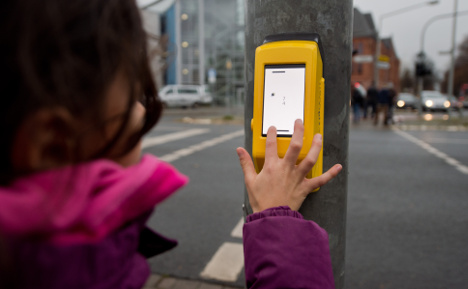 The roadside time killer was conceived by college student Sandro Engel two years ago as he waited several minutes for the lights to change and the green man to light up.

Based on the classic 1972 arcade game Pong, the table tennis variation needs no more than a finger to work the 'bat' shaped like a skateboard, a keen eye to return the ball, and an adversary, usually a stranger who is waiting on the opposite side of the road.

It also has a red-green hourglass effect to show how much time you have to beat your rival before the lights change.

"You play with people you haven't seen before, which is also cool," says Engel, who teamed up with a group of fellow students to build the prototype, which impressed the municipal authorities enough to give it a trial.

The game will be tested for four weeks at one crossing in Hildesheim while the students gauge whether the novelty wears off quickly for pedestrians or proves to be a hit that can be mass produced.

The signs are good so far: The promotional video for the game had five million internet viewings and inquiries have been received from the cities of Lyon and Oslo.