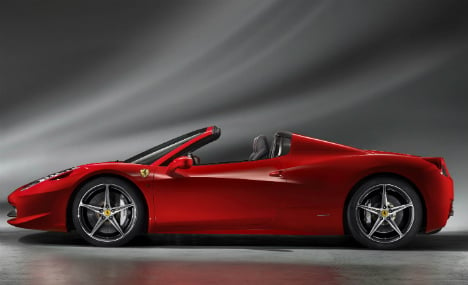 A less sparkly Ferrari 458 Spider than the one in question. Photo: DPA

The owner of a golden Ferrari has filed suit on Thursday against the city of Munich for €20,000 to cover the cost of damages and lost time with his car after the paint was scratched when it was towed.

The car belongs to the owner of a sewage pipe cleaning company. He uses the 458 Spider for work because sometimes he has to quickly go from one sewer emergency to another, the Süddeutsche Zeitung reported.

One day in May 2012, the Ferrari owner parked illegally, and along came the city of Munich and towed off the car, most likely taking it away at a speed much lower than its self-propelled maximum of 320 kilometres an hour.

But the car's special gilding, which is actually a layer of gold foil, was scratched in the process, the owner's lawyer said.

The city of Munich has already paid €7,000 to repair the damage done, but the car owner says its not enough. He's asking for another €13,000 to cover the 24 days he was without the car while the scratches were repaired and depreciation of the car's €250,000 value.

A suggestion from the judge of a compromise at €5,000 was rejected by both sides.

Court proceedings will go ahead in December if a settlement cannot be reached by then.