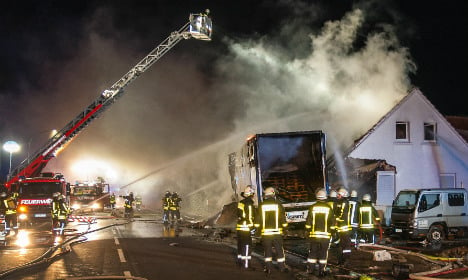 Fire crews at the scene in Halle, NRW. Photo: DPA
"There was a giant bang, one can hardly describe it. I got out of my bed and went down to my wife and suddenly there was a lorry in our house," Matthias Deppner, owner of the house told the local paper, Die Glocke.

After the impact, the truck caught fire and the flames spread to the house.

Deppner's wife suffered cuts and bruises. Two other women, sleeping in the other part of the duplex, suffered shock. All four are safe, though two were brought to hospital for smoke inhalation, Der Westen reported.

The driver died at the scene.

According to police, the truck suddenly veered off a straight stretch of road, which is actually closed off to heavy trucks, and drove into the house.

Around 80 first responders were at the scene to fight the flames.

Police are still investigating how the crash happened. Bundestrasse 68 that goes through the suburb of Halle, North Rhine-Westphalia, remains closed.